A Short History Of Lewistown Montana

The area that is currently the city of Lewistown was formerly the territory of the Native American Blackfoot tribe. Fort Lewis was founded in 1874 by the 7th U.S. Infantry's Company "F" to provide people who were traveling along the Carroll Trail with military protection. At that time it was the shortest route between Helena and Carroll, Montana. Lewistown was named after the fort.

Lewistown history reveals the area's first permanent settlers were the colorful, yet quiet and peaceful Metis, who were descendants of Indians and the French. Three bands that were comprised of around forty families settled in the area in 1879 and Lewistown was established by the Metis in that same year. Pierre Berger has been credited with founding Lewiston. Berger, in addition to several other families, moved to the area of current day Lewistown in 1879.

Francis Janeaux arrived with the second group of settlers. In 1883 he founded the area's first public schoolhouse. The date is considered to be Lewistown's official "founding." Another member and leader of the group was Francis A. Janeaux along with Virginia Laverdure Janeaux, who was his wife. Janeaux was a French Canadian and licensed trader. He filed for a homestead and constructed a stockaded trading post along Big Spring Creek in 1879. His homestead was the center of current day Lewistown.

Reedsfort was Lewistown's first post office. This log structure is still standing. It served a huge area that was surrounded by Philbrook, Judith Gap, and Fort Maginnis. During the winter of 1881-1882 mail was delivered just three times. At this same time, there was a lot of activity occurring within the Janeaux stockade. Janeaux had an interest in the welfare of the area's youth and brought Edward Brassey in to teach school children. Longtime public school teacher Mercy Jackson says that the school first opened in 1881. There were 4 white students and 35 mixed raced children. The log school was located across from the current day post office. Edward Brassey lived in the stockade with Janeaux.

In 1882 the town was platted by Dr. L.A. Lapalme, who was friends with Janeaux. He was a doctor, not a surveyor. Lapalme used Janeaux's fence as his starting line and it didn't conform with true North-South bearings. (That is why the streets are all off by about forty-five degrees). In 1883, the benefactor Janeaux donated eight lots of prime land to the local school district. Construction on a new school started immediately. The building was the area's first frame school house. The first woman teacher was Miss Winifred Shipman, and the school house was used for quite a few years.

Many people started to move into the area to homestead. Many of those people had an interest in sheep and cattle. Major industries developed out of these interests given the abundant supply of land that was available for accommodating both of them. After gold was discovered in 1880 in the Judith Mountains nearby, Lewistown became a gold rush site. Prior to the gold rush, central Montana's largest city was Maiden. After the gold supply dried up, many miners found jobs in Lewistown and settled in the town permanently.

Lewistown became the eastern terminus on the Montana Railroad. It connected with the city of Lombard, Montana which was approximately 157 miles away. This railroad connection to a national railway network through a Northern Pacific Railway connection located in Lombard, Montana. From 1895 through 1903 the Montana Railroad line as built. It operated as an independent railroad until 1908 when the "Milwaukee Road" (Chicago, Milwaukee, St. Paul and Pacific Railroad) acquired it.

In 1942, during World War II, a training base for the Boeing B-17 Flying Fortress was established west of Lewistown by the US Army Air Corps for training aircrews for missions into Europe and North Africa. The former airbase is currently the Lewistown Municipal Airport.

Currently, Lewistown is Central Montana's cultural and business center. It is quite fitting given it is the geographic center of Montana. It is one of the frequently overlooked jewels of the state and features a vibrant community with numerous amenities that are not often found in communities of that size. Throughout the city, there are more than 27 miles worth of walking trails, including large natural parks that have trails surrounding the "Frog Ponds" as well as through Brewery Flats and along Big Spring Creek. Every year thousands of people attend the Chokecherry Festival on the main street of the city every summer. Friendly people and great food make Lewistown Montana one of the Treasure State's hidden gems. 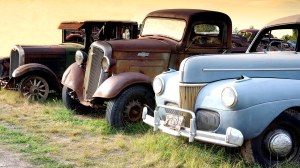